Last Friday, I did something I’ve never done before – I went to sit in on the recording of the audiobook edition of Unexpected Lessons in Love. If I’m honest, before I set off  the thought of listening to someone reading my own book out loud did make me feel a bit, um… what’s the right word? Anxious? Trepidatious? All those repetitions that would leap out! All the clumsy turns of phrase I’d want to change! All the times I used the word all. Which is, I know from proofreading this book, a lot.

But… the strange thing is that I noticed these things (plus a new one: how many inadvertent rhymes sneak past your eye) and yet I left the recording studio feeling Christmas Eve excited. Charlie Coletta, the actor reading the audiobook, did something magical to the words, as well as doing much better accents than I was doing in my own head while I was writing it – and suddenly I felt as if I’d met Jeannie and Dan and Owen and Rachel as real people for the very first time. Which, when you consider I’ve been living with these characters for well over a year, is pretty amazing.

When I say ‘recording studio’, we’re not talking X Factor. (Although Matt the studio engineer did namedrop a few celebrity actors who’d been there a few days earlier to record some drama productions.) The studio was in Kensal Rise on the very top floor of an old warehouse, up four flights of stairs in a very, very quiet soundproofed building. I had to pick my way through the cast of a Radio 4 drama eating their picnic lunch in the foyer. They were exactly as you’d expect the cast of a Radio 4 drama to look. One was wearing a jaunty indoors scarf and there was much jollity. 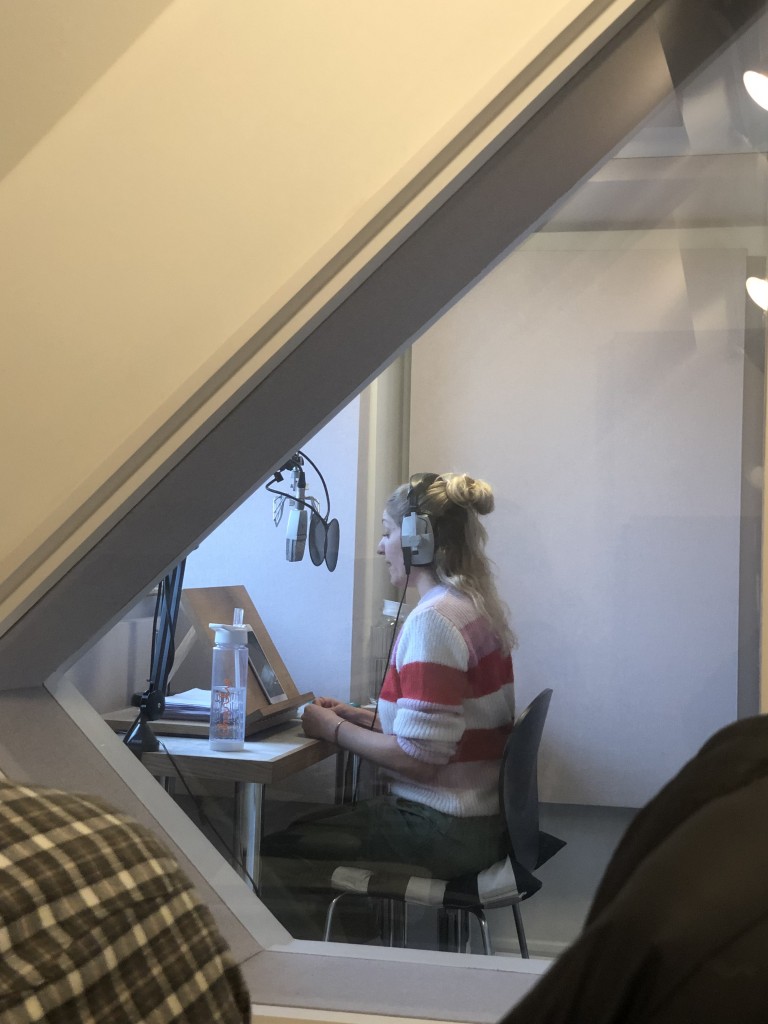 Upstairs, Charlie was already eighty pages into the book, installed in a tiny soundproofed booth under the eaves, wearing headphones and reading off a Kindle into a big microphone. On the other side of the glass, sound engineer Matt was listening intently to her playback, running his finger across the proofs, matching what Charlie was speaking to the lines in front of him: if she missed out a word, or fluffed any emphases, he caught it, paused the recording, played back up to the mistake and she carried on seamlessly. 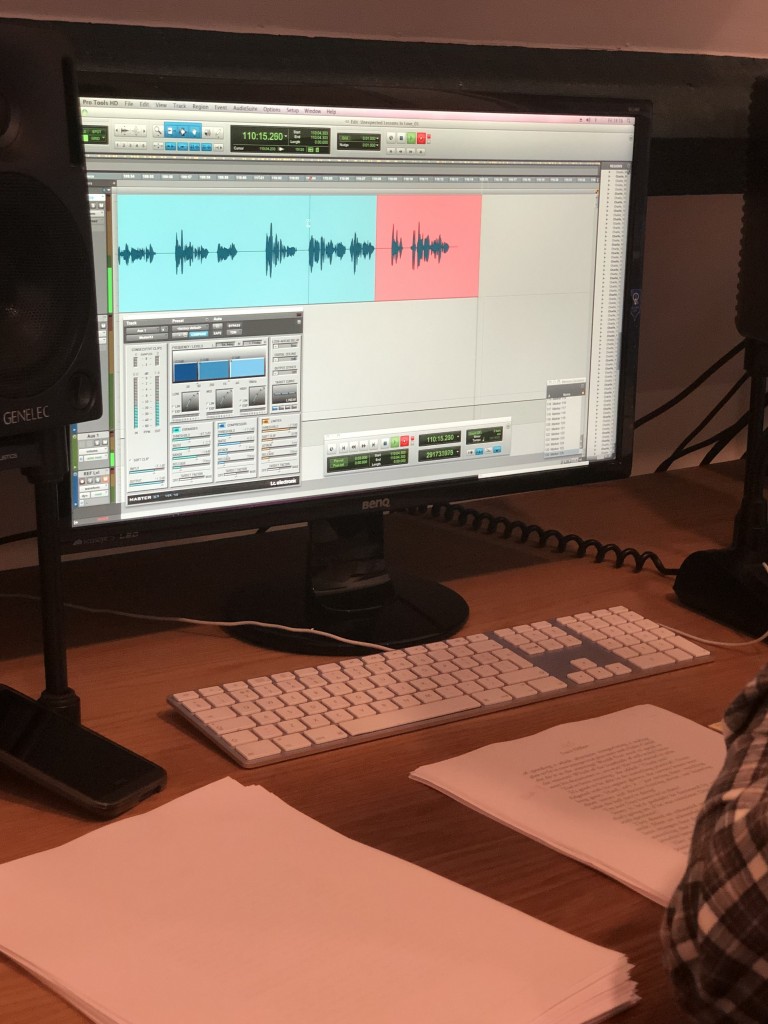 The recording equipment measured the peaks and troughs of her diction – a bit like the ICU monitors in the story SPOILER ALERT – so if Charlie made her plosives too explosive or her fricatives too… fricky, Matt stopped her again and she’d re-record that section. Audiobooks are usually produced at the very last stages of the publication process – because the editors need the  final, no-more-changes version of the text – and that makes the production timeline quite brisk compared with the print schedule: Matt told me that the recording process takes about five days, then the audio is sent to an editor who cleans up the pauses and checks for major mistakes, then a proofreader checks it word-for-word against the book, then it’s sent to the publishers to be proofread. If a word’s wrong, then it can be cleaned up by dropping in the same word taken from elsewhere, and if there’s a big problem (rare) the actor comes back to do re-records. 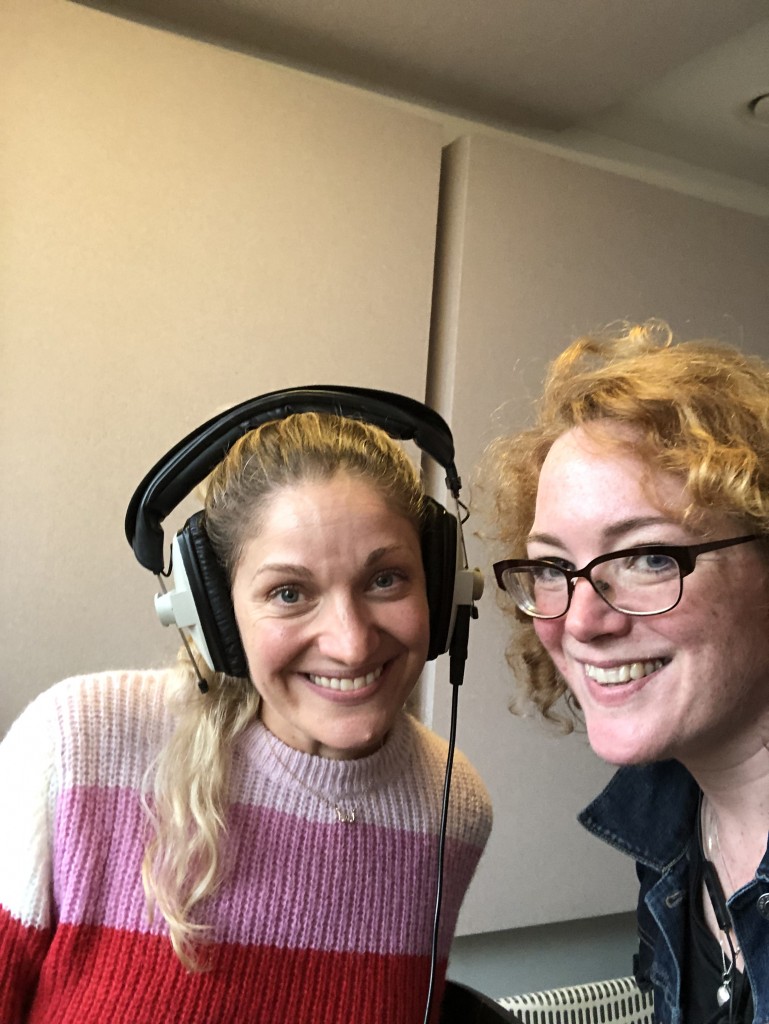 Being read aloud to is one of my absolute favourite things: it’s so soothing. You can’t rush or skip, you have to let your imagination engage completely with the words, and allow the pictures in your head to unfold. It’s a proper treat to yourself. My editor Sally and I sat in the tiny booth next door and listened to Charlie telling us the story in her beautiful calm voice, and after about five minutes we just went into the sort of relaxed state I can normally only achieve in a spa or with a lot of red wine. The stress of hoofing halfway across central London in the rain, late, melted away and at one point the three of us – me, Sally and Matt – found ourselves in tears at a part in the book that I know for a fact Sally and I have read about 123834 times now.

This is my (cough, quite a lot) -th book now, and listening to this recording reminded me all over again what a unique honour it is to write words that end up inside other people’s heads, lodging in their imaginations and taking their own shapes. Thank you so much for making Longhampton feel so real – out of the many dreams I had as a little girl of being a writer, this was one that hadn’t even occurred to me!

And it’s really not long till it’s out. The audio version of Unexpected Lessons in Love is available from December 5th (as is the ebook), a whole month ahead of the paperback. If you haven’t ‘read’ a book on audio, why not give it a try? Libraries now have downloads you can borrow (just plug in your headphones!) and it’s a wonderful way of weaving books into the dull parts of your day – on your commute, while you’re ironing or walking the dogs, or if you’re compelled to watch the Rugby World Cup final in a pub this weekend against your will.

I’m a real convert to audiobooks and always need recommendations, so if you’ve listened to something amazing recently, I would absolutely love to hear about it in the comments!