Ink and pens and paper

When I was going through my late father’s things – the first, panicky, pre-funeral sweep of drawers and cupboards in search of documents – I found his fountain pen. 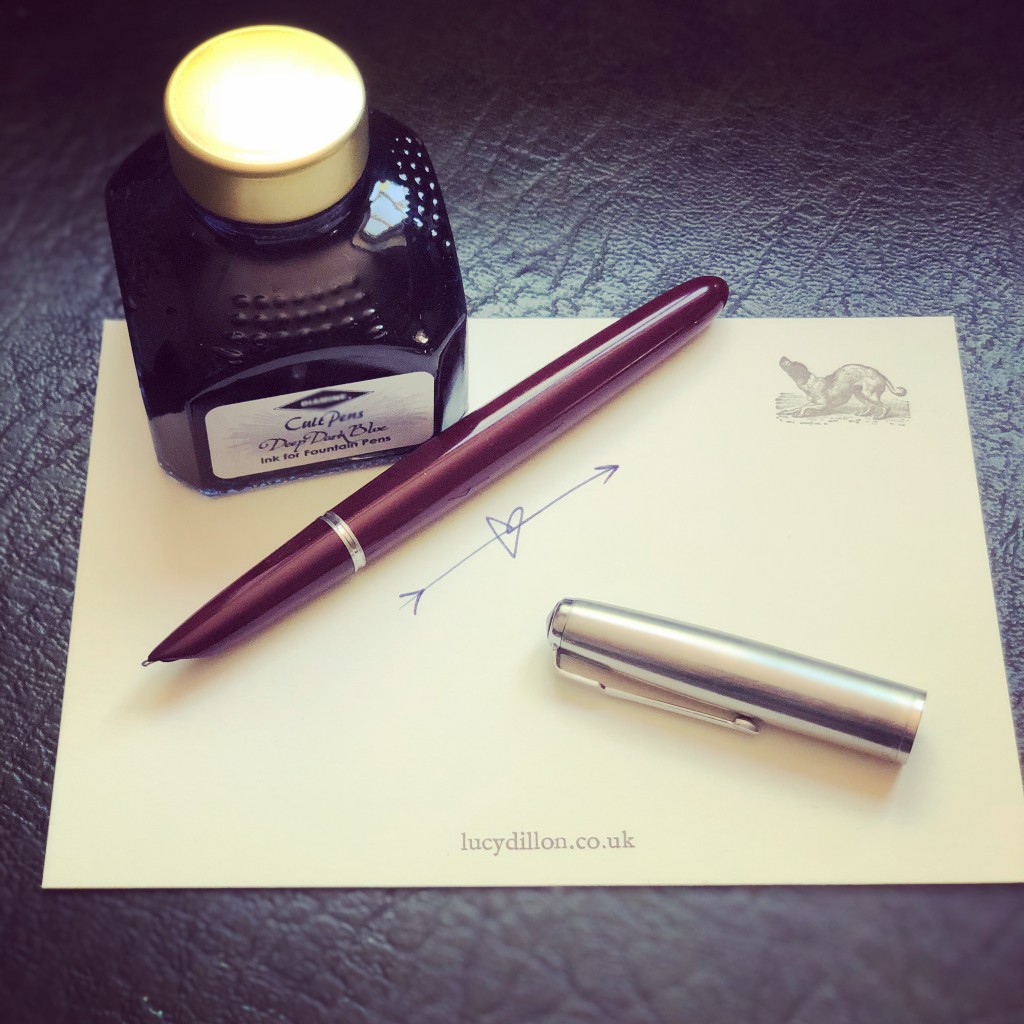 It’s a maroon Parker 51, the classic mid-century pen, with a tiny hooded nib, a silver arrow clip on the barrel and a surprising elegant jade jewel on the cap. I don’t actually remember ever seeing my dad use it but he was the sort of man who believed that proper letters, proper communications should be signed off in ink, with a nib. He was – and I think my sister would agree with me here – not a biro person. I wondered if the Parker 51 was a graduation present, or an ‘off-to-university’ gift from my grandparents. Like so many questions I’ll never now know the answer to, I can only listen to that funny instinct that whispers at the back of your mind – and in this case, it says yes. I can see my solid Northern granda making sure his bright lad had the proper equipment to tackle a History degree, or the office life that beckoned after it.

I stuck the pen in my bag after the funeral and brought it home to Herefordshire, only to find I couldn’t open the barrel to get it working. The thread was jammed. I thought soaking might loosen any ink that might be hardened inside, and as soon as I dropped the pen into a pint glass of warm water, a glass marble-swirl of blue ink coiled out of the nib, the first time in years that the ink had flowed through its veins. I watched, fascinated: when had that ink been sucked into the sac inside? 1965? Earlier? Had my dad last filled it late one night to finish an essay? Or to write a letter to his mother? A love note to my mum? To sign the deeds for the house they bought before I was born and lived in until he died? The old ink swirled, and sank, and still the pen wouldn’t unscrew.

Clearly I needed help before I wrecked it. A quick hunt on the internet revealed a world of vintage pen experts who could bring it back to life. Like vintage engagement rings, I always sense a faint melancholy about old fountain pens – it’s such a personal item, special to someone for a reason that’s now been lost to time. So many generous gifts presented with a flourish to herald new beginnings – graduations, or first jobs; weddings or engagements; promotions, confirmations, a sign of having arrived in adult, inky-fingered life. Whose handwriting shaped that nib? When were they used? It’s rather sad to see them lined up on a velvet tray, all those human details lost in the past, leaving the pen just a pen. But they’re beautiful, and you can buy new nibs, and isn’t there something wonderful about letting your thoughts flow through a pen that might have been shaken by the Blitz or tucked into a tailored inside pocket on Carnaby Street or Fifth Avenue?

I sent mine off to Vintage Fountain Pens, and for £30, Mark returned it to me, clean, working, filled with a lovely period perfect blue-green ink that gave me a weird Proustian memory of… wasn’t this the ink Dad used? I don’t know how he does that. I love the idea that an antique pen expert can someone divine the right ink for any pen. I treated myself to some Diamine Ink from Cult Pens – because this pen deserved some really stylish ink – and now it’s on my desk, being used as my every day note taker and plot planner. My dad would be quietly amazed that he’s now become such an integral part of my working day; he used to say, regularly, that the most writing he could do was a shopping list, and that I got my words from my mum. But while that’s true, I also got a lot of other vital writer’s skills from him – a love of research, curiosity about history, an interest in the business of publishing – and the sense that he always wanted to hear what I was telling him.

And now, I have his pen. Freshly cleaned for me, but still trailing those hopes of the early 60s, reminding me where I came from, how lucky I am to be here. He’s with me now, every time I uncap his Parker 51 and get on with the day’s tasks in hand. Thanks, Dad. I won’t lose it.

What a charming story. Thank you for the wonderful images of times gone by. One hopes that we never lose our connection to them and the power of the handwritten word.

Nicely written. I loved your imagery.